FINCA helps Jordanians living in poverty access financial services to improve the quality of life for themselves and their families. 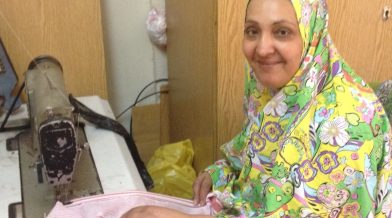 Becoming financially independent is one life’s greatest challenges. But at 60 years old Naema embodies the entrepreneurial spirit that, with the right support, can transform lives. “FINCA has been so good to me! Not only are they respectful, but they have given me what I need to make my business grow!”

With a lack of natural resources, including water and oil, Jordan has one of the smallest economies in the Middle East and is heavily dependent on foreign assistance. Jordan also has a considerable unemployment rate. An influx of refugees from the ongoing conflict in neighboring Syria has added to the difficulty of Jordanians finding jobs.

Jordan’s population is young: 70 percent are under 30 years of age, and nearly one-third of Jordanians under 25 are unemployed. Despite the fact that more women than men in Jordan hold higher education degrees and diplomas, only a quarter of the female population make up the labor force.

When poor people have access to financial services and life-enhancing products, they can earn more, build their assets, create jobs and cushion themselves against external shocks. Since 2007, FINCA has been helping thousands of Jordanians improve their lives. FINCA offers financial services such as loans throughout the country.