FINCA helps Afghans living in poverty access financial services to improve the quality of life for themselves and their families. 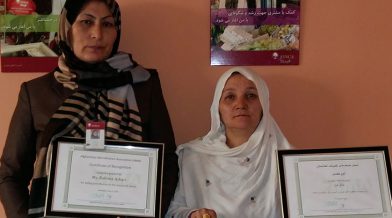 Throughout Afghanistan, women have been the most vulnerable segment in society. Providing for themselves and their families has become a challenge as they are often forbidden to work or attend school. Through access to finance, however, women in Afghanistan have a chance to change their lives.

Enduring decades of conflict, Afghanistan’s turbulent history is compounded by a harsh terrain and an economy heavily dependent on foreign aid. Today, 36 percent of Afghans live below the national poverty line and struggle with high unemployment, inadequate housing, and shortages of clean water, electricity and health care.

Women in Afghanistan are especially vulnerable to subsisting in poverty. Many women cannot seek employment, restricted by societal rules and a lack of basic education. Only a fifth of Afghan women are actively employed. In addition, the majority of Afghan women are illiterate.

When poor people have access to financial services and life-enhancing products, they can earn more, build their assets, create jobs and cushion themselves against external shocks. Since 2003, FINCA has been helping thousands of Afghans improve their lives. FINCA offers financial services such as loans throughout the country.