FINCA helps Hondurans living in poverty access financial services to improve the quality of life for themselves and their families. 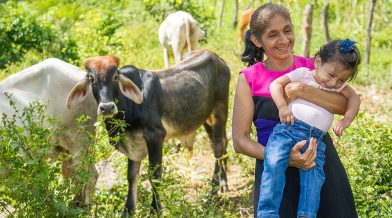 With FINCA’s Village Bank loans, Anarda Nunez is able to provide for her family and tend to her farm in Honduras.

Honduras is one of the poorest countries in Central America. About two-thirds of the population lives below the national poverty line. Poverty rates are especially high among rural and indigenous people and in the south, west and along the eastern border. Poverty in Honduras is compounded by the constant threat of natural disasters – hurricanes and floods – as well as land erosion.

Those living in rural areas are the most vulnerable to poverty. Most farming families are subsistence farmers, growing just enough to feed themselves. With restricted access to land, farmers depend on off-farm employment or remittances from family members for support.

When poor people have access to financial services and life-enhancing products, they can earn more, build their assets, create jobs and cushion themselves against external shocks. Since 1989, FINCA has been helping thousands of Hondurans improve their lives. FINCA offers financial services, such as loans, savings, microinsurance and money transfers throughout the country.