FINCA helps Georgians living in poverty access financial services to improve the quality of life for themselves and their families. 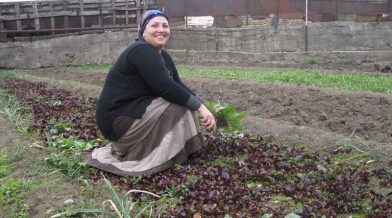 Lala is very pleased with her experience with FINCA and proud of the changes it has helped make possible for her family. She says, “My FINCA Georgia loan makes it possible for me to grow more kinds of crops to sell, and to save some money, which was hard to do before.”

Georgia’s economy took a severe toll in 2008 during the global financial crisis. After an armed conflict with Russia, growth slowed, and the country was forced to cope with many internally displaced persons. Forced by conflict to leave homes and jobs behind, these groups are particularly vulnerable to poverty in Georgia. Many come from a farming background but face a shrinking agricultural sector and difficulty transferring their skills to other industries.

Today, unemployment affects about a fifth of the population. Georgia’s young population, in particular, face challenges in finding a job. About a quarter of young people in Georgia are not employed or in an education program.

When poor people have access to financial services and life-enhancing products, they can earn more, build their assets, create jobs and cushion themselves against external shocks. Since 1998, FINCA has been helping thousands of Georgians improve their lives. FINCA offers financial services, such as loans, savings and money transfers throughout the country.