FINCA helps Armenians living in poverty access financial services to improve the quality of life for themselves and their families. 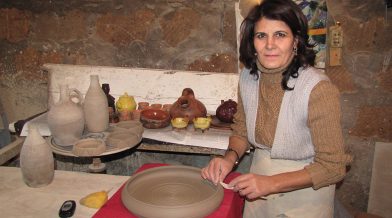 Thanks to her family’s hard work, her sound business skills, and FINCA loans, Goharik’s traditional Armenian ceramics business has continued growing. The family’s living standards have improved along with the profits from the business.

After the breakup of the Soviet Union in 1991, masses of unemployed Armenians found themselves with no income. Though Armenians eventually found better economic times, the country’s economic growth slowed significantly after the global financial crisis of 2008 and the percentage of Armenians living in poverty increased by 30 percent.

Today, over a-third of Armenians live below the national poverty line and more than half the population remain jobless for over a year. A significant segment of the male population leave the country to find work elsewhere, leaving women to shoulder the burden of caring for the household, often dependent on remittances for income.

When poor people have access to financial services and life-enhancing products, they can earn more, build their assets, create jobs and cushion themselves against external shocks. Since 1999, FINCA has been helping thousands of Armenians improve their lives. FINCA offers financial services, such as loans and microinsurance throughout the country.