FINCA helps Malagasy living in poverty access basic services to improve the quality of life for themselves and their families. 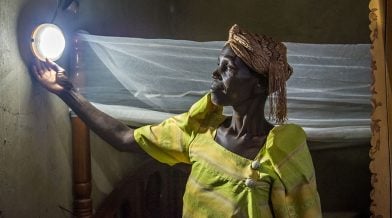 For a long time, the reliance on kerosene lanterns gave Jane Namusisi constant worry. Now, a high-quality and affordable solar home system fills her home with clean, reliable lighting. “With kerosene lamps, I worried that the children would get burned in the house or there would be damage to my property.”

Madagascar was one of the last major habitable landmasses on earth to be settled by humans. Its economy is based on the cultivation of paddy rice, coffee, vanilla and cloves. Despite a wealth of natural resources and a tourism industry driven by its unique environment, the country remains one of the world’s poorest, and is heavily dependent on foreign aid. Since gaining independence from France in 1960, Madagascar has experienced repeated bouts of political instability, including coups, violent unrest and disputed elections.

Madagascar, along with much of sub-Saharan Africa, is on the verge of a crisis. By 2035, the International Monetary Fund estimates the number of Africans joining the working age population will exceed the rest of the world combined. To fill this surge, 18 million new jobs will have to be created each year for the next 20 years across sub-Saharan Africa. In the meantime, Malagasy rely on the informal sector for a chance to earn a living. In addition, access to basic services, like energy, water and sanitation, education, health care and agriculture, is often inadequate.

When poor people have access to financial services and life-enhancing products, they can earn more, build their assets, create jobs and cushion themselves against external shocks. FINCA is helping Malagasy improve their lives by supporting access to basic services through FINCA Ventures.