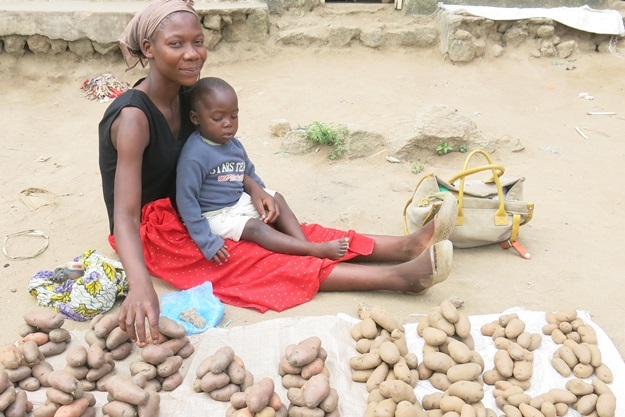 Paida lives in land-locked Malawi, one of the world’s most densely populated and least developed countries. She got through high school, but didn’t pass the entrance exams for university. So she knew she would never have a chance for a well-paying career. But that hasn’t stopped her. Paida has big dreams.

Married in 2003, Paida and her husband live in a small rural town and are the proud parents of three boys: 10-year old Andy, 7-year old Razil, and 2-year old Emmanuel. They are happy, but their sons have brought new challenges to their already hard lives.

The need to feed her sons motivated Paida to start a small business in town, selling sweet potatoes, samosas (fried pastries with savory fillings) and mandasi (doughnuts). She even went to the lake shore town of Mangochi to buy fresh fish at the docks to sell at home.

Child care was out of the question, so Paida had to bring little Emmanuel with her to her place in the market, but he seemed to attract customers to her business. Her sales started off small, but she was soon bringing home money and providing the boys with more and better food.

Paida’s sons came first, but she also had to help out her aging parents. And she wanted a better future for her boys, which meant saving so they could go to university—the dream she was never able to achieve for herself.

Paida knew she had to boost her earnings from her food sales. She would have to be able to buy more fish, sweet potatoes, and other items—and haggle for better prices from the wholesalers and fishermen.

Smart and a tough bargainer to boot, Paida realized there was no way she could expand her businesses without financing.

On the advice of her neighbors, Paida joined a FINCA Village Bank and used her first loan of $49 to buy more fish and other foods to sell. Her strategy worked, and her business gradually grew in volume and profits.

As her earnings increased over time, Paida was able to better feed her family and ensure their daily needs were taken care of. She made her loan payments on time. And she took out larger loans to continue expanding, financing her purchases and steadily growing her sales.

She could afford to give her parents some money, so they would not lack for food and other basic necessities. Soon, Paida started saving money, even enough to buy a plot of land to build a house for her family. But she has bigger dreams.

“My vision is to become a successful car dealer. To be travelling to Tanzania to purchase used cars to sell in Malawi.”

It’s an audacious goal. And Paida would need a loan of $2,400 to buy her first used cars. But she can access the loan and if this venture goes well, Paida is confident that one day her sons will be able to go to university!