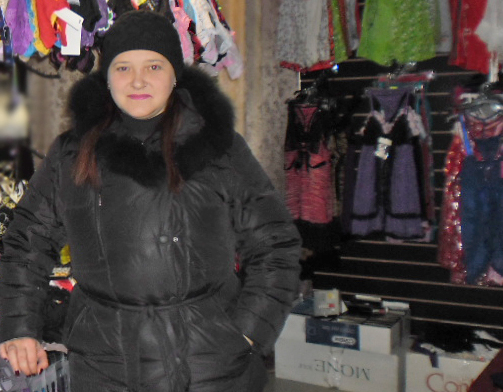 Natalia Borisovna has spent her 30s doing what some people only dream of – she’s built her own small network of multi-location chain stores. Like all retail business success stories, things begin with one shop and grow with smart decisions and the right type of investments.

Natalia started a small retail shop in the mid-2000s in the Kuneevsky market in Togliatti from which she sold hosiery and underwear. Like all young entrepreneurs, she had big dreams which she shared with her friend Elena, who Natalia learned was a client of FINCA. As Natalia’s shop attracted more and more customers, she needed to expand her inventory and the types of products she sold, so she decided to do what her friend had done and take out a loan from FINCA in 2006.

Using her first loan of 50,000 Rubles ($1,550) to expand her inventory resulted in her ability to attract more customers and create stability. With her newfound confidence and additional profit, she took a second loan in 2007 for 60,000 Rubles ($1,850) and was able to hire an employee. By 2011, she had increased her loan sizes to 130,000 Rubles ($4,000) which funded the opening of two more shops in two other markets.  Natalia’s wide assortment of high-quality products at affordable prices has helped her establish a steady and loyal customer base that readily recommends her shops to their families and friends.

Today, Natalia operates nine shops and employs nine people. And, if she hasn’t been productive enough, she has also gotten married and has two young children. Of her experience with FINCA she says, “Working with FINCA is always nice and the turnaround on loans is quick. FINCA loans have helped me more than once when there was a necessity, and I look forward to working with them long into the future.”