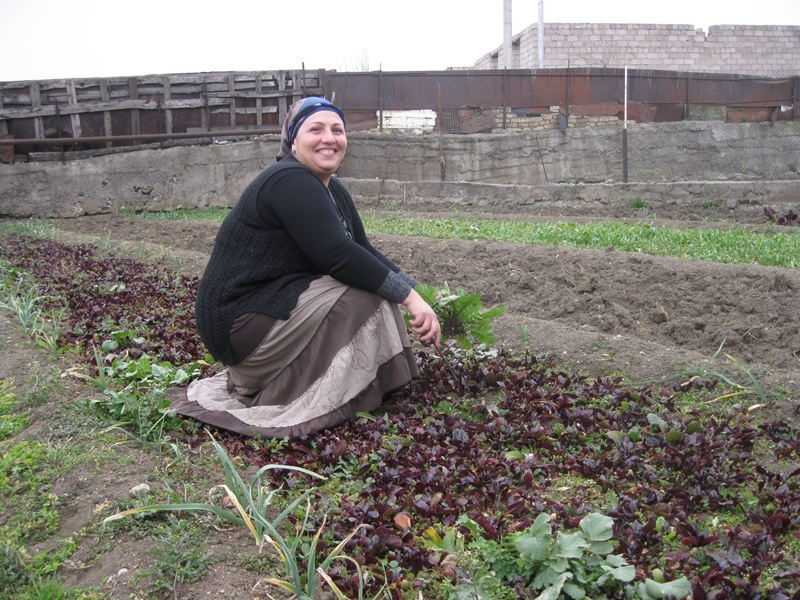 Lala lives in the town of Ponichala, on the outskirts of Georgia’s capital Tbilisi, with her husband, their son and her husband’s parents. To help support the family, she raises vegetables and other crops on a small farm. She sells her vegetables in the local market to people from Ponichala and the area. Lala first became a FINCA Georgia client in 2008 in order to boost her farm’s productivity and increase her income to help improve the family’s living standards.

She used her first FINCA loan of $500 to purchase more seeds for different types of vegetables as well as fertilizer. Once her farm’s yields had begun to increase and she was able to make more money from selling her produce in the market, Lala combined her increased profits with savings she had accumulated to buy a used car in order to transport her vegetables to the market in Ponichala. Having the car has also made it possible for her to sell her produce in a bigger market in Tbilisi, where there is more demand and she can get better prices for her vegetables.

Lala is very pleased with her experience with FINCA and proud of the changes it has helped make possible for her family. She says, “My FINCA Georgia loan makes it possible for me to grow more kinds of crops to sell, and to save some money, which was hard to do before. Now, with a car, I can go to the market in Tbilisi more often, and make more money to help my family. ”