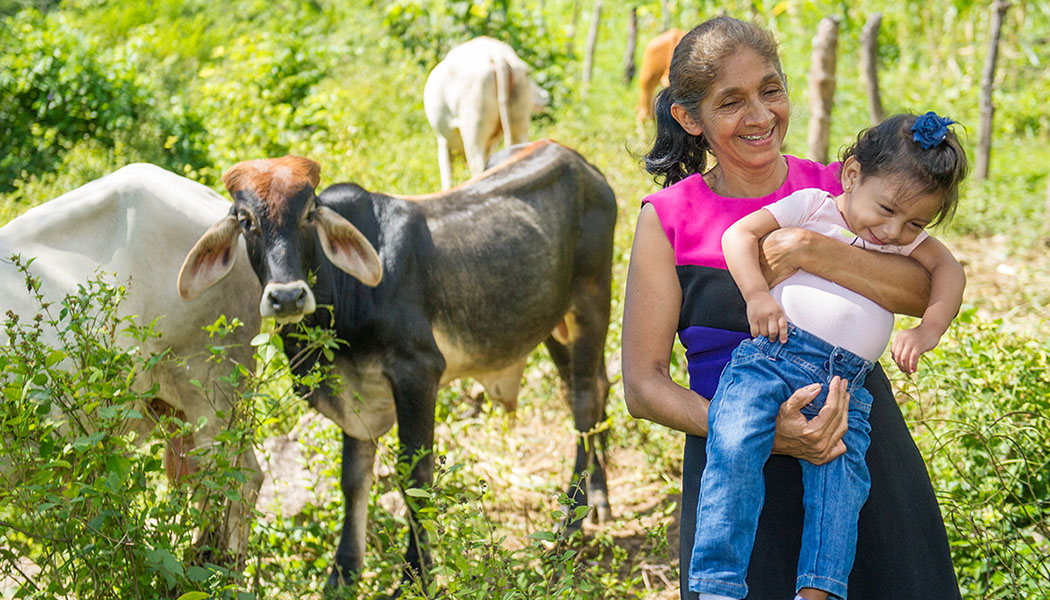 The years have not been kind to Anarda Virginia Dávila Núñez’s lined face. But she smiles with pride and love as she looks around her farm and at her beautiful granddaughter, Stheffy. Anarda carries 13-month old Stheffy everywhere. The little girl is partly paralyzed after contracting Zika at four months old.

In a small village in Honduras, Anarda owns about 17 acres of land, just half of which is arable. Five or six skinny cows graze on brush between the trees on a few acres. The rest is too steep and rocky to raise anything.

The hardscrabble farm does not yield much but Anarda is proud of what she owns and has achieved. She is grateful to FINCA for the group loans. Nine years ago, she and a group of neighbors formed the “Chacaras Unidas” Village Bank group and she has been its president ever since.

Our Village Bank group is very united and FINCA has always supported us to help our businesses grow. Village Banking™ and small group loans are targeted to very low-income entrepreneurs with the smallest enterprises, enabling communities to come together to share and guarantee one another’s loans. Today, 29 percent of over 44,000 clients in Honduras utilize Village Banking™ loans.

The Chacaras Unidas Village Bank group’s  most recent loan of 70,000 Lempiras (about $3,050) is split between its eight members. Most members borrow the same amount year round but Anarda’s loan size varies with the season. She borrows more for the corn harvests in the spring and fall, when she hires four people to work with her to pick the corn. Each harvest yields a total of about 4,000 pounds of corn.

In December, Anarda sells bread and nacatamales (a Honduran specialty for the Christmas and New Year’s holidays). With the profits, she purchases feed for the pigs and chickens she raises.

“The loans have helped me a lot,” Anarda says. “Thanks to them, I was able to help my six children get ahead and they all completed their education. I have been able to buy these lands, which were formerly my father-in-law’s, and I made a lot of improvements to the house.”