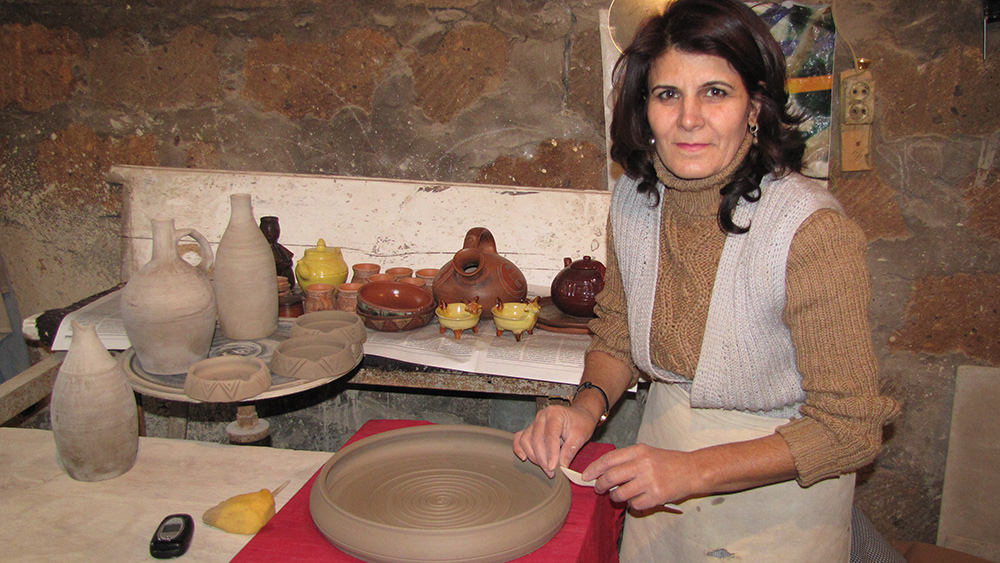 Goharik Martirosyan inherited her traditional Armenian ceramics business from her parents. She has always been very proud of the family business and has been devoted to teaching the skills of pottery and design to all of the family’s children to ensure that its folklore and traditions are passed on to the next generation. Goharik’s efforts have been successful because everyone in the family, including all the children, is a master of this delicate profession. Her family is much admired in her village as its sole producer of fine ceramics. The family has a stall in the central Vernisage market in the Armenian capital city of Yerevan, where most of its pottery is sold. Goharik also sells her products to many regular customers, who come to her house to order and purchase exclusive works.

Goharik first became a client of FINCA Armenia in 2009 because she wanted to expand the business to make sure it could sustain and employ her entire family. She knew there was more than enough demand for her fine pottery, so she used her first FINCA loan of 250,000 AMD (US$680) to purchase bulk supplies of raw materials including clay and glaze, as well as additional equipment, in order to save money and increase the output of the business.

Thanks to her family’s hard work and her sound business skills, the business has continued growing. The family’s living standards have improved along with the profits from the business. As a result of Goharik’s strong record of timely repayments and her trustworthy behavior, FINCA Armenia recently increased her loan size to 800,000 AMD ($2,180) in her most recent loan cycle, so she can continue her business’s growth trajectory.

Goharik hopes to use FINCA loans to be able to continue boosting the family’s output and even to start export sales of her fine ceramics products in the future. However, as she says, the most important thing for her is not the business, but the continuation of family traditions and passing those traditions on from generation to generation.