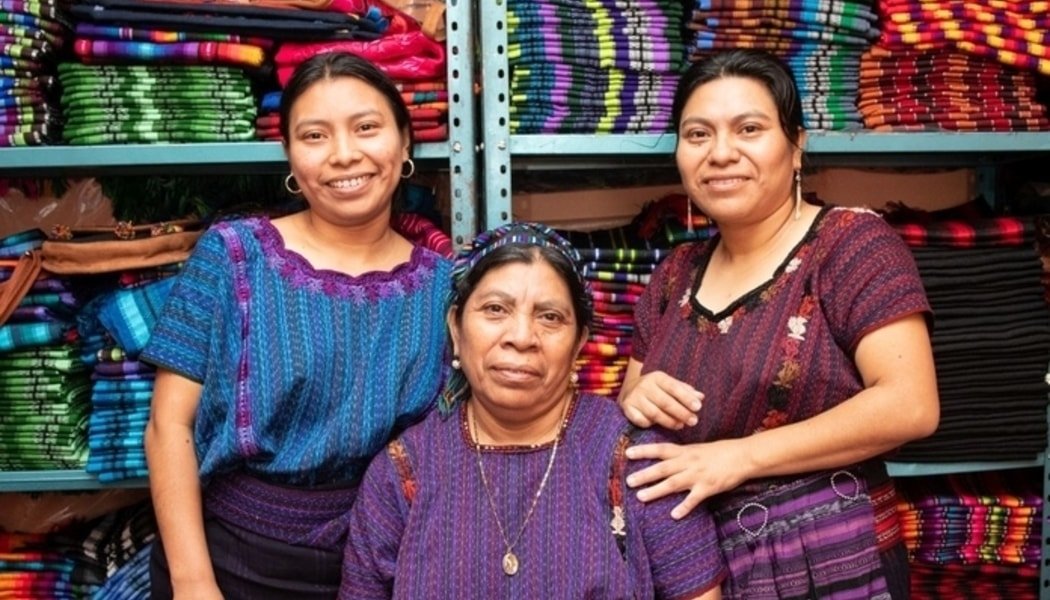 With the help of her FINCA loans, Paula Calabay has supported herself for 35 years by weaving. For many women in the highlands of Guatemala, weaving represents much more than just a job. For Paula it represents both artistic beauty and a means to improve the livelihood of her daughters, Sara and Angela. Through FINCA loans, Paula has been able to expand her business of high-quality handmade fabrics in order to support both her family and lift up the surrounding community.

A proud mother and FINCA client, Paula has always brought great enthusiasm to her work. Weaving is a part of her family’s rich tradition, which she learned from her grandmother. And it was the only thing keeping Paula afloat while the girls were young. For as long as they can remember, Sara and Angela have been selling their mother’s handmade trinkets to tourists. They spoke Mayan with their mother, and learned Spanish in school (an opportunity never available to Paula) and their dealings with tourists helped the girls learn a little English. They are also learning weaving to carry on the family tradition. The credit Paula’s family received from FINCA has helped support their growth.

In many cases, potential entrepreneurs already have a business concept in mind but just need an opportunity to pursue it. FINCA helped Paula get the break she deserved. Sara says, “My mother absolutely loves FINCA. FINCA was there for us when no one else was. FINCA helped make our lives livable.”  Today, Paula maintains an impressive business overseeing eight employees who do piece work from their own homes.

Paula’s specially embroidered products can be found around the country in the tourist markets of Antigua, Panajachel, and Coban. Although these markets see a lot of competition, they offer lucrative opportunities through bulk sales by exporters in Mexico and the United States.  Just as satisfying is when customers come to Paula’s home to make purchases. Paula’s high quality goods are very popular for tourists, especially some of her embroidered pieces that can take up to a month to produce.

A Continued Vision For Growth

Even though Paula and her business are thriving, she has ambitious goals for the future. First, Paula dreams of expanding her sales internationally. Second, she seeks to open a proper store near the main street of her town, since it’s hard to attract potential customers down the narrow lane that leads to her house. Lastly, she would like to take part in more cultural events, such as an artisan exposition she attended in Mexico when she was younger.

Paula has been a superb client over her years with FINCA, and she never misses a payment. Due to her impressive financial track record, Paula knows that other banks would want her business, but she remains loyal to her partnership with FINCA. As her daughter Sara said, “You don’t forget about your friends.”