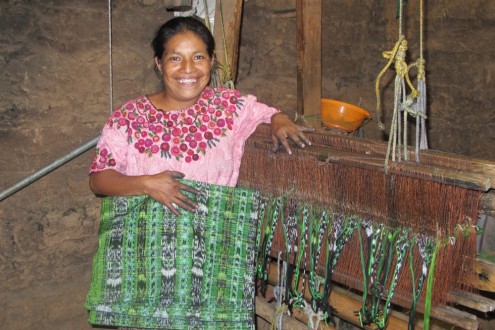 The business of weaving is a family affair for Catarina Castro Cac de Lux and her husband. The 30-year-old and her husband have earned their living over the past seven years by weaving beautiful scarves, blankets and fabric for skirts, which they sell in their village of Aldea Pachaj, Patzite, Quiché Guatemala.

While the business has provided the family with a meager income over the years, there was never enough to ensure that their five children—ages 15, 12, 10, 8 and two-and-a-half—had more than small amounts of food with which to nourish their growing bodies. Sending the children to school was also a luxury the family couldn’t afford.

Catarina and her husband knew that if they could purchase another loom, they could increase their production, so Catarina joined the Pachaj Flowers Village Bank group and took out a loan, which she used to purchase a second loom. She was also able to use a portion of her loan to buy thread in bulk, which was not only a wise choice with regard to increasing production, but also a necessity, considering where the Cac de Lux family lives. Once the rainy season sets in, it’s very difficult for the villagers to travel to larger markets to access materials, so Catarina made sure she had adequate supplies on hand to continue production during this particularly challenging time of year.

Catarina is proud to report that, as a result of taking out her Village Bank loan, she and her husband have increased their production two-fold, making it possible for them to continue to work to expand their weaving business. She also says that the increase in income has allowed her to buy a greater variety of foods for her growing family and, best of all, her children are now able to go to the local village school.

Catarina and her husband are very grateful to FINCA for helping them to create a better life for themselves and their children.