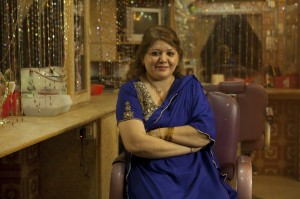 Mrs. Bushra Rasheed describes our Bank as her safe harbor in the deep ocean that life can sometimes be. A few years ago, Ms. Rasheed’s life was very challenging. Her husband and his new wife took everything that Mrs. Rasheed owned, leaving her to raise four children on her own. She had never had a job other than taking care of the family.

But being suddenly responsible to provide her children the basic necessities of life, Mrs. Rasheed started running a beauty shop out of her home, drawing on a talent for hair and makeup for which she had been known since she was a young girl. She got some advice that to build a good business, she needed a shop in the market street. So Mrs. Rasheed found a good location, and when the representatives of Kashf Microfinance Bank Ltd (now FINCA Microfinance Bank Ltd) came to see her, she stayed up all night deciding whether to take the business loan. Four years later, she not only has her shop, but she has expanded it and opened a clothing boutique as well.

She has also created jobs for four women who work for her in the beauty shop. Mrs. Rasheed says that in the early years, there were days when she would walk home crying from worry and fatigue, but she always dried her tears at the doorstep so her children would not see. Today, all her children are educated. She recently provided a beautiful nikah ceremony for her daughter. She even bought a zero meter car. Mrs Rasheed’s tears are a thing of the past.