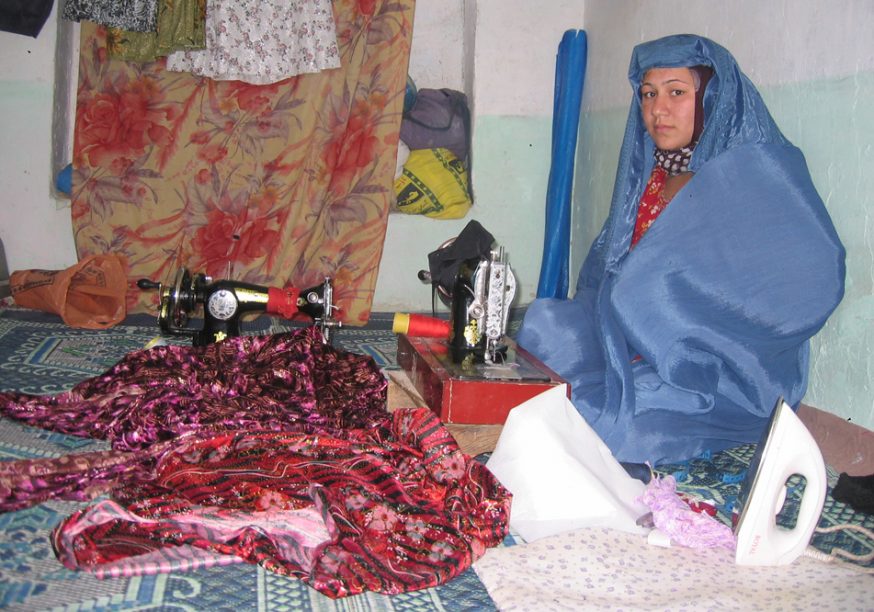 Roqia, a 20-year old woman who lives with her parents and six younger children in Sharak-e-Awlya in Mazar-e- Sharif in northern Afghanistan, tells her story in her own words:

As the eldest daughter of my family, I have great responsibility to help look after everyone. We belong to a poor family, where my mother and father both work hard to support us all. I realized that I should not remain a burden on them any longer and should find some sort of job to earn income honestly and legally. When I came of age, however, my family was reluctant to let me leave our home to learn a trade because of our local custom and tradition, but I put pressure on myself to learn something.

I decided to learn tailoring from a young woman who lives in our neighborhood. I worked there for a year or so as a student to learn tailoring. Then I started sewing clothing and other articles for women. I was paid a small daily wage for my work by the woman, but I realized that I could earn more money by purchasing a sewing machine and fabric and other items and then working on my own than as a daily wage worker.

I talked with my parents about getting a sewing-machine for myself but they said they could not afford to buy a new machine. I asked them to let me borrow the money from someone else and pay it back afterwards with the money I earned from my female customers but again my parents refused. Soon after, some of our neighbors told me they met with a female credit officer from FINCA who told them about FINCA. I was interested immediately in learning more about the process and I asked the women about it. I discussed the issue that night with my parents and provided them with the details. My parents warmly welcomed my request and I applied for a loan, completing the loan documents with the help of a woman who had been educated and could read.

I got my first loan for 8,000 Afghani (US$160) in November, 2007 and I used it to buy a sewing machine with some needed items like thread, fabric, scissors etc. The sun of luck started shining on the windows of our house! I kept on asking customers to bring clothes for me and I worked hard and tirelessly to pay the installments for the machine and to take a share in feeding my small brothers and sister as an elder member of the family.

I received my third loan in February 2009 for 10,000 Afghani (US$200) from FINCA. I have bought two sewing machines and now have a student I am teaching. I am very happy with my new life and I am a good supporter to my family. I have said good bye to poor days and am beginning to live a prosperous life with my family. I tell other Afghan women to get a loan from FINCA to live a good life. It is better to light a candle in a dark place rather than to insult the darkness. In the end, what I need to say comes from the bottom of my heart. THANK YOU FINCA!