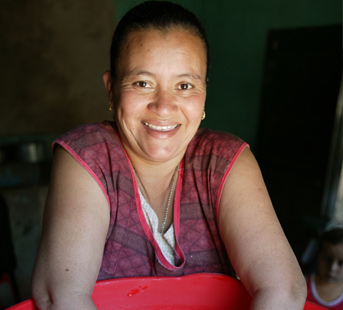 In Honduras, where the average annual income is just $4,700, Ana Osorio struggled to feed her family. Despite working hard at selling her homemade cheese to supplement her husband’s income from milling grains, she could only buy milk in small quantities at high prices. Her first FINCA loan of just $105 allowed her to buy bulk quantities at better prices. Since then, her business has grown rapidly, nearly quadrupling her profits.

Before, Ana’s family couldn’t afford meat and her children were left without school supplies, and were often teased by their classmates as a result. With newfound success from her FINCA loan, Ana’s family can now afford a balanced diet that includes meat several times a week, and the children have all the books and school supplies they need.

When you enjoy this simple but delicious recipe for Honduran chicken and rice, you can remember Ana and other FINCA clients who can now afford to have meat as a regular part of their diet.

Season the chicken on both sides with salt and pepper. In a large straight-sided skillet, heat the oil over medium-high heat until rippling. Sear the chicken thighs, turning once, until golden brown, 8-10 minutes per side. Transfer to a plate and set aside.

Add the rice, Sazón and saffron and cook, stirring, for 2-3 minutes. Pour in the chicken stock, season with salt, pepper and hot sauce, stir, and bring to a boil. Reduce the heat to maintain a simmer and nestle the chicken thighs skin side up in the rice. (Try not to submerge the skin, so it stays crisp as the rice cooks.) Cook, partially covered, until the rice has absorbed the liquid and the chicken is cooked through, 25-30 minutes. If the chicken skin is not crisp, place the pan under a hot broiler until the chicken is crispy and golden brown on top.

To serve, remove the bay leaves, sprinkle the cilantro and parsley over the rice and gently stir to incorporate. Serve directly from the pan, with the yogurt sprinkled with lime zest and the bottle of hot sauce on the side.

When your family or guests ask about this delicious dish, you can tell them about FINCA’s entrepreneurs like Ana, and how simple it is to give hardworking low-income business owners like her the chance to succeed.