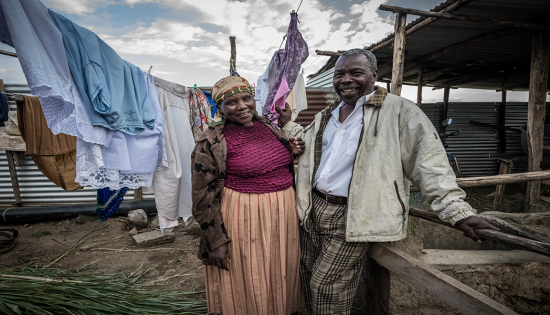 This World Toilet Day, FINCA recognizes the agents and adopters of innovation in sanitation. Social enterprises like Sanivation, a FINCA Ventures partner company, are delivering sanitation solutions for people in non-sewered communities. Such innovations allow low-income families to respond to nature’s call from the safety, convenience and dignity of their homes.

Most people in developed countries do not worry each time they use the toilet at night. But for the majority of people in developing countries, it is another story entirely. Take James Mugweru, a farmer who owns three dairy cows in Naivasha, a town in western Kenya. At 60-years-old, James is a proud father of seven and a grandfather to 10 children.

James and his wife, Margrate Wambui, live in an open field outside town. Like those around them, they rely on an outdoor pit latrine each time nature calls. But in contrast to their neighbors, James and Margrate do not have a fenced-in property. Combined with the preponderance of petty thieves in their poor neighborhood, they are left more vulnerable to attack. This problem is compounded when visiting the outside toilet after dark.

It is unsafe for us to use the pit latrine at night, especially for my wife. Our property is not fenced-in, so anything could happen to her.

In the first half of 2017, a Sanivation employee paid a visit to James and Margrate’s neighborhood. Aware of the lack of basic water and sanitation services, Sanivation was promoting a new solution, called Blue Box. This portable, container-based toilet is placed inside the home and is serviced twice per week by Sanivation, all for just 200 Kenyan Shillings per month, the equivalent of about $2.

James and Margrate were quick to take advantage of this opportunity. Given that they live in a one-room house with the bedroom and living area divided by a simple partition, James built a small room off the back of the house for the Blue Box. Now, they have a convenient, comfortable and private way of safely using the toilet.

Blue Box is much more comfortable for the elderly and those who are sick. We really struggled to squat over the pit latrine. This is much better.

No longer worrying about something as routine as the toilet has freed up James to think about the future.

“I wish to change from dairy farming to rental properties because it is less labor-intensive,” says James. “I want to leave something good behind for my grandchildren to inherit.”