In May 2007 FINCA launched the Village Banking Campaign, an ambitious call-to-action campaign designed to harness social momentum and mobilize the people and resources needed to alleviate poverty on a global scale. Key milestones laid the groundwork for our efforts:

Internationally, the resolve and tools to end human suffering from poverty and hunger were being mobilized, and FINCA was perfectly positioned to expand the anti-poverty strategy we’d been perfecting for two decades.

Our goals for the Village Banking Campaign were clear:

We are pleased to share the success of the campaign, on the heels of FINCA celebrating 25 years of poverty alleviation in 2010:

=> The campaign launch at NYU’s Kimmel Center, sponsored by AIG and attended by more than 300 supporters and students, introduced our Campaign co-chairs Her Majesty Queen Rania Al-Abdullah of Jordan and FINCA Ambassador of Hope Natalie Portman and set forth the campaign’s ambitious goals

=> The evening salon featured additional remarks by Her Majesty Queen Rania and Natalie Portman, followed by an engaging dialogue between Hernando de Soto, Peruvian economist and president of the Institute for Liberty and Democracy, and political economist Francis Fukuyama, then-Director of the International Development Program at the Paul H. Nitze School of Advanced International Studies of Johns Hopkins University

=> Natalie Portman participated in an eight-campus, bi-coastal university tour, speaking at Harvard, NYU, Princeton and Columbia Universities on the East Coast, and UC Berkeley, Stanford, UCLA and the University of Southern California on the West Coast, and sharing the powerful impact of microfinance with more than 4,000 leaders of tomorrow

=> The campaign was featured on a New York’s Times Square JumboTron for three months during the end-of-year holiday season, thanks to the generosity of a corporate sponsor

=> FINCA Jordan, our first program launched in the Middle East and South Asia region and made possible by FINCA Board Member Soledad Hurst and her Husband Bob, was opened by Her Majesty Queen Rania and, today, provides loans to more than 11,000 clients, 98 percent of whom are women; and 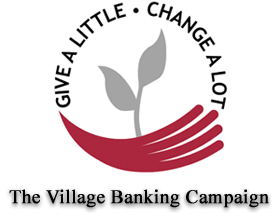 When we announced the Campaign in 2007, we never dreamed, in a million years, that the world would undergo a global economic meltdown just one year later. As the world watched the collapse of many financial sectors, we are proud to say that microfinance remained resilient, and we are thrilled to tell you that, despite the challenging economic times, we were still able to come close to – and surpass – our three main goals. By the end of 2010:

=> We had established 99,354 Village Banks across our five-continent network, reaching 99 percent of our goal of establishing 100,000 banking groups

=> Our nearly 7,000 employees worldwide were serving 765,000 clients with loans averaging $597, and repayment rates remaining exceptionally high at 98.7 percent. Our growth continues to be strong, and we currently boast three subsidiaries serving more than 100,000 clients each, and a handful on their way to the 50,000 client mark

On behalf of all of us at FINCA and our hundreds of thousands of clients around the globe, thank you for supporting of the Village Banking Campaign. We hope you will continue to champion FINCA’s poverty alleviation efforts.

*FINCA served the people of Mexico from 1989 to 2016. On November 10, 2016, FINCA transferred its operations there to Te Creemos, a mission driven Mexican Microfinance Institution that shares FINCA’s commitment to providing responsible financial services to clients of all income levels.