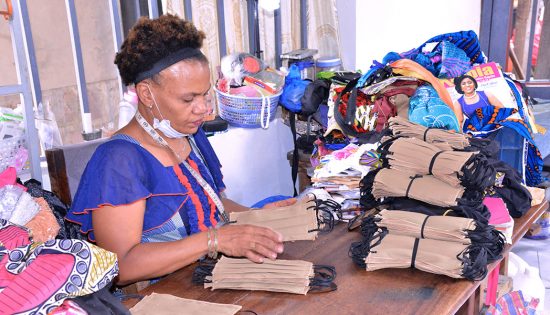 Across the world, the coronavirus pandemic has forced people to adapt lives and livelihoods to a “new normal” that has dragged on for much longer than anyone could have anticipated. Yet, in countries like the United States, the success of recent vaccination efforts has provided a glimmer of hope. With vaccination rates increasing and infection rates plummeting, it may seem like the end of the pandemic is near.

However, in many countries where vaccines are still limited or unavailable and the virus continues to spread, the situation remains dire. Over the past several weeks, India has been fighting to contain a devastating second wave of the virus. Hospitals are overwhelmed and are facing a critical oxygen shortage even as the government reports record numbers of new cases. There are fears that the situation in India and other countries struggling with vaccines could spiral out of control. Low-income people in these countries are the worst affected by the pandemic.

A FINCA survey conducted in 2020 assessed the impact of the pandemic on over 10,000 clients around the world. Aside from the almost universal experience of losing income–most of FINCA’s clients make their living from small, informal businesses that are particularly vulnerable to any kind of disruption–they were unable to adapt to the complete halt in economic activity caused by national lockdowns. Within just the first few weeks of the start of the pandemic, over 50 percent of customers experienced food insecurity, particularly in Latin America and Africa.

The threat of a second wave of the virus is even more worrisome given the widespread underreporting of infections combined with lack of information and hesitancy regarding the vaccine. The World Health Organization (WHO) has created the COVAX program (a combined initiative between wealthy governments and pharmaceutical companies to ensure equitable access to vaccines), which has delivered 69 million vaccine doses since February. However, several countries have already exhausted their initial vaccine shipments. They risk not receiving additional doses anytime soon as the world’s largest vaccine producer, India, has halted vaccine exports while they work to get their own outbreak under control. In neighboring Pakistan, where FINCA has over 1 million clients, 37 percent of adults indicated that they will not get vaccinated. In all of FINCA’s subsidiary countries in Latin American and the Caribbean combined, less than 15 percent of the population has been vaccinated.

The lack or scarcity of vaccines in many countries exemplifies the growing disparities between low- and high-income regions of the world. But, even as wealthier countries begin to slowly reopen thanks to the success of their vaccination programs,  another deadlier wave of the virus is likely if many countries around the world continue to struggle with the pandemic. It means that the people that FINCA serves will continue to bear the brunt of the crisis.

That’s why FINCA is sparing no effort to ensure the safety and wellbeing of clients, from enforcing health guidelines at all branches worldwide to ramping up digital financial solutions to continue meeting people’s needs efficiently and conveniently.