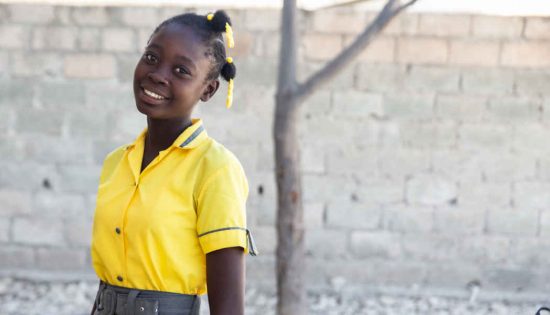 COVID-19 is giving Americans a powerful appreciation for what is lost when schools shut down. But in many of the countries in which FINCA operates, the lack of a robust school system is a way of life, and the value of education is taken for granted by few. It’s one of the greatest challenges parents face in building a brighter future for their children, and it’s why FINCA constantly looks to support education and educational institutions.

In Haiti, one of those clients is Kerlande Toussaint. In a country where the average adult has less than five years of schooling, Kerlande and her husband Annesse both graduated from college and had many promising options to live abroad.

While many people would jump at the chance to leave Haiti and build a comfortable life elsewhere, Kerlande and Annesse chose to stay. And precisely because they knew the value of education, they decided to become teachers in Haiti’s sprawling capital city of Port-au-Prince.

They loved being teachers and Kerlande saw an opportunity for the couple do more. In 2006, she decided they should open their own small elementary school for children too poor to attend other schools. Those first couple of years were hard, but by 2008 their tiny school was up and thriving.

In 2010, a catastrophic earthquake leveled much of Port-au-Prince, including Kerlande and Annesse’s school. But the earthquake did not shake their determination to give poor kids a chance to go to a good school. Within weeks Kerlande and Annesse had moved to their hometown of Gonaives, the capital of Haiti’s Artibonite department about 100 miles north of Port-au-Prince.

Once in Gonaives they opened a new school on a plot of land in a poor and neglected neighborhood. They started with a single kindergarten class in late 2010. Among that first group of students was their eldest son.

Each year since they’ve added one grade. They’re able to pay teachers’ salaries and operating expenses with the modest tuition they charge and charitable donations that cover tuition for especially poor families.

But to build a new classroom or buy books and equipment, Kerlande and Annesse need cash up front. That’s where FINCA’s loans comes in.

“We really trust FINCA,” says Kerlande. “And we’re glad that FINCA trusts us. We used our loans to invest in the school. We know other people who get loans from big banks to buy cars or a motorbike. That’s not a good investment.”

Thanks to their strong management and determination the school has grown into a bustling academic center, with more than 30 staff members and 600 children enrolled in grades K-10.

Just as in the United States, Kerlande and Annesse had the unthankful task of closing the door of their school in March of 2020. The risks posed by the coronavirus were far too great. Virtual schooling wasn’t an option given the dearth of computers and of internet access. So for five months learning simply stopped.

By mid-August with relatively few confirmed cases, the government allowed schools to reopen. Like jurisdictions everywhere, the government had to weigh the potential costs with the potential benefits. And as elsewhere, it wasn’t an entirely smooth process. Teachers, students and parents were concerned about safety. And money was tighter than ever. But by the end of the month, Kerlande and Annesse had re-opened on a limited basis, with masks required and plenty of lessons on proper hygiene.

There are no guarantees that they’ll be able to stay open, but Kerlande and Annesse are doggedly determined to succeed. Considering that they managed to rebuild after a devastating earthquake, it feels safe to think that they will find a way to weather the current pandemic as well.

Note: The pictures in this article were taken in March, just weeks before Kerlande and Annesse closed their school.