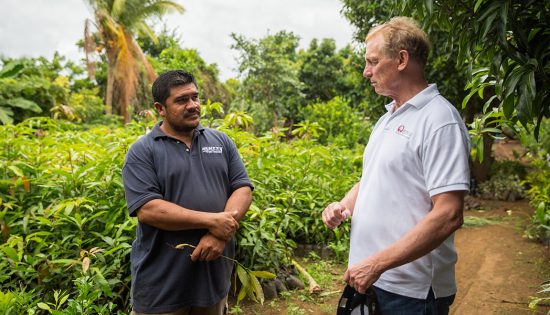 At FINCA, sustainability has always been one of our guiding principles. At every link of the chain, we have prioritized sustainability to support our primary goal of helping every family we lend to achieve financial independence. We have always encouraged these families to save, initially in their village banks.

We’ve also made our global network of community-based microfinance institutions and banks financially self-sustaining using revenues from interest on loans and other products. Initially, we subsidized these at the international level with grants and donations until, one by one, they crossed the line into profitability. Then we introduced an ‘affiliation fee’ on every loan we disbursed. This was used by FINCA International to help cover the costs of supervising the global network, fundraising, and providing technical assistance to our subsidiaries. Eventually, the day came when all our costs were covered, and the entire FINCA network became sustainable.

Like any growing network––and like many of our clients––we have moved in and out of the realm of sustainability. As an agricultural economist (and something of a specialist in small farmer credit), I’ve always been fascinated by developments in the agriculture sector. For many years, small farmers have been unable to compete with commodities like maize, wheat and beans imported from developed countries, but when China’s economy boomed, and created hundreds of millions of new mouths to feed, all that changed. Peasant farmers are a vital part of the global food supply chain, and they can’t even produce enough food collectively to feed the populations of their own countries.

The new developments in American agribusiness will ultimately affect agricultural practice and sustainability the world over. Technology, specifically, is making the difference: more than $700 million has been invested in agricultural technology start-ups at a time when U.S. farm incomes are diminishing. In Broken Bow, Nebraska, revenues from arable farms have fallen by almost half since the corn price crash of 2012.

The Financial Times of London reports that a quarter of the agri-tech developments in 2017 came from corporations demanding innovation and striving for longevity. Some of these developments take the form of genetic modification, which is transformative in the sphere of global food production and distribution, and some are purely technological. But whatever form it takes, agri-tech has enormous power, and this was illustrated most dramatically by a recent World Bank study, which found that GDP growth originating in agriculture is nearly three times more effective in reducing poverty than GDP growth outside this sector. This is surely food for thought.