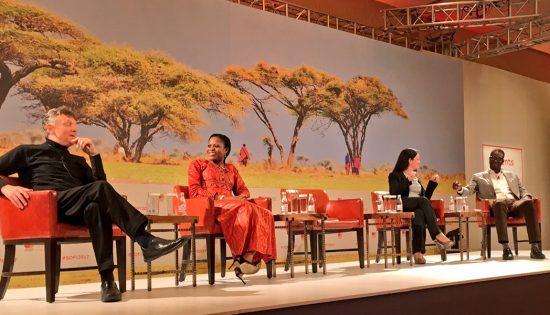 Do financial-sector innovations actually improve the lives of poor people? That question fostered a lively debate at the Mastercard Foundation Symposium on Financial Inclusion (SOFI) held in Accra, Ghana on November 7-9.

Moderated by Khalil Shariff, CEO of Aga Khan Foundation Canada, the debate tackled the resolution: “innovations in the financial sector can no longer respond to the daily challenges of poor people.”

(Debaters were chosen to debate one side of the topic, regardless of their own personal viewpoints.)

Financial technology—or “fintech”—companies have proliferated across Africa, but they have not fulfilled their promise to improve the lives of the poor, Kalonda and Wright argued. Most rural areas simply don’t have the infrastructure that allows fintech innovations to function properly.

“Only 50 percent of poor people in Africa have a mobile phone,” Wright noted, “and according to a 2016 report in The Economist, the majority of those phones are feature phones, not smart phones.” Wright added that villages have limited or no electricity, which makes it difficult to charge phones, and often, people must travel long distances just to obtain a signal. These obstacles make it difficult for poor people to use and benefit from any of the newest fintech innovations. “Only 12 percent of over 200 fintech deployments have reached over one million accounts,” added Kalonda.

The team cited other obstacles, too. First, poor households have few smartphones, and men typically own the feature phones in those homes. This leaves women with limited or no access. Second, the amount of data needed to make fintech transactions can be prohibitively expensive. Third, low-end smartphones simply don’t function well enough to enable many fintech innovations; they have very limited RAM, a short battery life, screens that shatter easily, and a persistent problem with “fat finger errors” that make many of them unusable. Yet these very flawed devices are supposed to ensure that the poor can access financial services.

Kalonda and Wright also faulted fintechs for failing to develop user-friendly applications, particularly for African communities where digital literacy is low. Fintech solutions target the elite and often leave the poor behind because they simply don’t understand the needs of poor customers. Graham Wright suggested that fintech innovations haven’t helped to reach the very poorest: those who cannot read. “According to the World’s Women Report 2015,” said Wright, “there are 781 million illiterate people on the planet.”

Fintech deployments have also failed to protect low-income consumers. Poor people continue to lose money through fraud, and many are blacklisted because they cannot repay the dozens of small digital loans offered to them. “Digital credit is literally tearing the lives of the poor apart,” said Kalonda. “Over 2 million Kenyans are being black listed for loans that are just under $5.”

Tamara Cook launched a forceful rebuttal by arguing that if it weren’t for fintechs, the majority of the world’s poor would still be excluded from financial services. “Banks took 125 years to reach 25 percent of the Kenyan population,” noted Cook, “but it’s taken only two years for fintech to reach and double that number.”

Both Cook and Elhanan Owureku Asare argued that fintechs have helped re-organize data, which in turn has created more innovative mechanisms for delivering financial services to the poor. Credit scoring models, for example, create efficiency and save time for those seeking to access capital. Even low-income clients can now apply and secure credit approvals in just a few minutes.

Cook and Asare also noted that fintechs have provided consumers with better options to pay for goods and services. Pay-as-you-go solar plans have brought light to many rural homes, and pay-as-you-go school fees mean that many more children from poor families can now attend school. These and other incremental payment options wouldn’t be possible without fintechs’ having built the rails onto which new product innovations have been layered.

At the end of the debate, the audience voted Cook and Asare the winners, concluding that, indeed, financial technology innovations had made progress in helping the poor to improve their lives.

And ultimately, debaters on both sides agreed on several key points: fintech innovations need to be more inclusive, easier to use, and designers should work harder to provide greater consumer protection and empowerment.

The conclusion mimics FINCA’s own viewpoints – despite the fact that Mamie Kalonda argued against fintech. By investing in financial technologies, FINCA is helping to close the financial exclusion gap and allowing more unbanked communities access needed financial services. Throughout our network, FINCA has launched digital technologies, such as mobile banking, mobile savings, agency banking, digital field automation and biometric fingerprint technology and alternative credit scoring. FINCA’s approach is to adopt and scale these technologies with strong consumer protection while still maintaining close relationships with our customers.