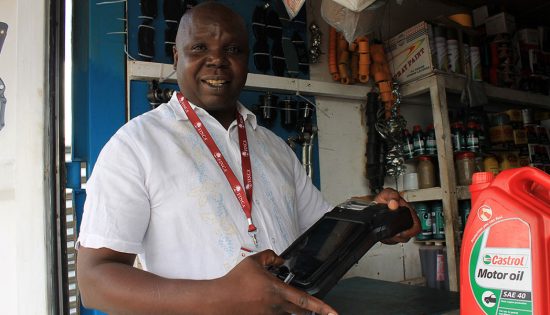 One hot morning in March, with the bright Malawian sun beating down on us, my FINCA colleagues and I dodged traffic on the busy main street to pay a visit to Spy Auto Parts, just across from a bustling Blantyre market.

Conveniently located in the heart of a commercial district, Oliver ‘Spy’ Kamwendo’s auto parts business is flourishing. The store is just around the corner from the busy FINCA Henderson Street branch – a perfect location for FINCA Malawi to try agency banking with our clients. In fact, Oliver became FINCA Malawi’s first banking agent, helping our FINCA Malawi colleagues to introduce thousands of clients to agency banking.

Building a Network of Banking Agents

A banking agent is a business owner who is contracted by FINCA to process our clients’ transactions on our behalf. Using point-of-sale terminals equipped with biometric scanning, FINCA customers can identify themselves with just their fingerprints. They can easily and conveniently pay bills, make deposits, withdraw or transfer funds, view account balances or conduct other transactions. The wonderful thing about agency banking is that it allows FINCA to bring our services closer to our clients. It saves them the precious time and money they would otherwise spend traveling to a bank branch. Even if an agent is close to a FINCA branch, it gives our clients the opportunity to avoid long queues at the branch.

Despite the clear benefits offered by agency banking, our clients needed time to develop trust in banking through a third party and digitally. Spy’s proximity allowed FINCA Malawi staff to closely assist our clients in the transition process, until they became comfortable transacting with the new banking process. Today, FINCA Malawi is working with four agents and expects to onboard more very soon. Over 4,600 transactions have been processed by these agents so far. An Opportunity to Grow

Spy Auto Parts was instrumental in FINCA Malawi’s successful launch of agency banking in 2016, but it wasn’t only because of its location. It also helps that it’s an established business at the helm of an experienced entrepreneur. In fact, Spy learned how to run a business from his father. Growing up, his father would involve Spy and his eight siblings in various business ventures, imparting knowledge and ensuring his skills were passed down. Spy further honed his business acumen through his studies in marketing. Today, in addition to running Spy’s Auto Parts, he also sells clothing, exports sculptures to South Africa, and even ran a lodge in his hometown of Lunzu before settling in Blantyre.

Through his business income and the commissions he earns as a FINCA agent, Spy makes enough money to support his wife and their five children, sending them to the best schools possible. Spy sees his partnership with FINCA as “an opportunity for my business to grow and gain more recognition.”

So it’s a win-win for both Spy and FINCA.

And as for his nickname, Spy? Young Oliver was addicted to watching action movies growing up and that’s what inspired him to name his shop Spy. Looks like the name has stuck.