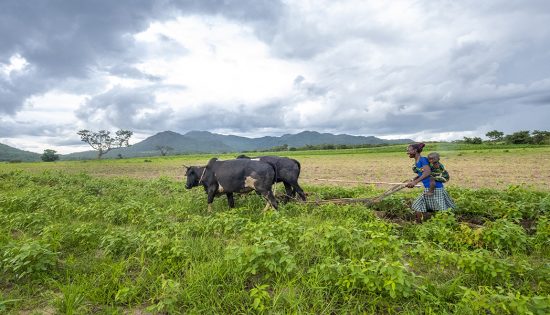 The United Nation’s Food and Agriculture Organization (FAO) was founded on October 16, 1945. To highlight the FAO’s mission of creating a world without hunger or malnutrition, every year we celebrate World Food Day. We’ve made a lot of progress since 1945, but much more needs to be done, especially to fight hunger in Africa.

As the FAO notes, “There is more than enough food produced today to feed every last one of us. Yet over 820 million people remain chronically undernourished, amid signs of diminishing momentum towards reaching Zero Hunger. In Africa, in fact, hunger is on the rise in almost all subregions, with an overall prevalence nearing 20 percent.”

One of the most important things that we do at FINCA is give loans to farmers to help them increase production. By helping our farming clients grow more, they are better able to take care of themselves and their families as well as sell more foodstuff into the market so that others in their community have something to eat. That’s classic microfinance at work. But it’s not the only thing that we’re doing.

Here are three projects that we have underway in Africa that you might not have heard about.

Decades of focus on growing cash crops (e.g, corn/maize and cotton), have depleted soils and made farming in sub-Saharan Africa increasingly unproductive, threatening food and economic security. Through our partnership with Good Nature Agro, we’re helping change that. Good Nature Agro teaches smallholder farmers to grow legume seeds (e.g., soybeans) as an alternate to standard cash crops. Farmers are seeing their income double or triple as well as seeing improvements in soil fertility and health as a result. A win for farmers. A win for consumers. A strike against hunger.

Over 70 percent of people in sub-Saharan Africa are smallholder farmers. With inadequate infrastructure throughout the continent, most of these farmers suffer significant post-harvest losses due to the difficulty of getting their produce to market. In Tanzania, estimates put the loss for some crops at 50 percent of production. That’s a huge cost to the farmers and to the country as a whole, making them more dependent on imported food. Our partner—East Africa Fruits—is tackling food distribution inefficiencies by building out a cold-chain storage and transportation infrastructure to get more food to market. Another win for farmers. Another win for consumers. Another strike against hunger.

Historically, farmers in Africa adjusted their planting to correspond to the onset and length of largely predictable rainy seasons. Today, increased variance and distribution of rainfall, commonly attributed to climate change, undermines this historical reliance. So we’re supporting Ignitia’s deployment of a weather forecasting system designed specifically for poor farmers in Africa’s tropical regions. By improving their decision-making and operational planning, farmers have the confidence to invest in their farms and grow their businesses. Yes, another win for farmers and consumers. And another strike against hunger.