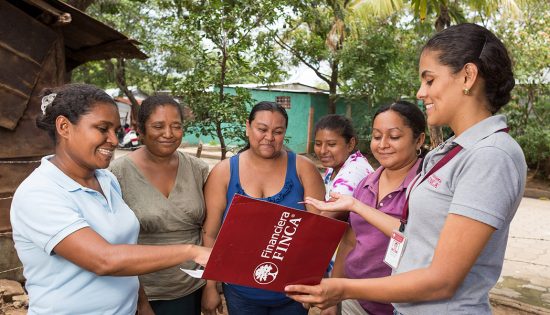 Growing up, my parents taught me the importance of unity, hard work, and dedication. In El Salvador, my family were farmers. They reaped the soil with maize, beans and coffee, and they owned cows, chickens and pigs. Many of them were also tailors or street vendors. However, they often never got to enjoy what they produced. The struggles of poverty became a roadblock for my family. Amongst our financial struggles, the ongoing civil war and escalating violence, my parents and close relatives immigrated to the United States. They strived for success and a better future.

My parents taught me that their story is in many ways my own as well. I use it as inspiration for helping my community. Working at FINCA has taught me the importance of financial independence, community development and empowering women. Moreover, I studied the history of FINCA in Latin America and the success of microloans, village banking and many other programs. My own family in El Salvador have credited their success to forms of village banking and microloans that allowed them to nourish their businesses.

The History of Microfinance Success in Latin America

Central America, prone to natural disasters and recovering from years of financial instability, is in fact where FINCA began. In 1985, one of the first Village Banks was opened in my country of El Salvador. Next would be Mexico, Honduras, Guatemala, and Haiti in 1989. At the time, traditional banking institutions did not service loans small enough for many small farmers. Village Banking allowed for small communities to take out a “village loan” and each farmer would pay a portion. This was the birth of microloans.

Today, my family in El Salvador has felt instability due to the unstable macroeconomic environment. Before 2020, many Salvadorans were earning less than two dollars an hour. Many, including my family, rely on local tourism and donations, but crime and violence make life difficult. However, the introduction of pay-as-you-go systems has made accessing microloans and financial services easy for my family and their community. It has created a safety net for the people who need it most.

A Future of Success

These stories are not limited to El Salvador. Financial independence continues to be my family’s goal both in El Salvador and in the United States. It is one of my own goals. My own experiences, as well as this internship motivate me to attain this goal and help others do so as well. I know firsthand about the repercussions of poverty, but now I also know the work being done to eliminate it. FINCA has dedicated itself to help people build assets, create jobs and raise their standard of living. I, too, will continue to dedicate my career to doing the same.