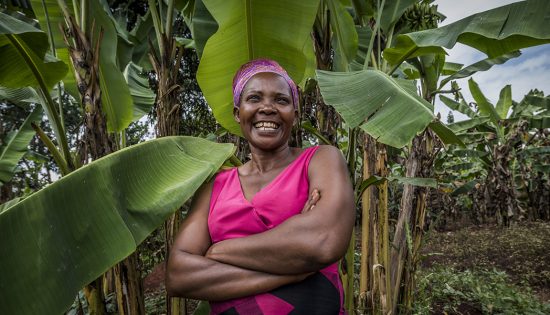 Women in rural areas in the developing world are impacted the most by the double burden of their location: living in high poverty areas and lacking access to basic services, such as education, sanitation and banking. But rural women are also some of the most resilient and resourceful people in the world.

On the occasion of the International Day of Rural Women, here are four reasons why FINCA invests in rural women:

Rural Women Suffer the Most from Unhealthy Home Environments

Around the world, rural women are usually tasked with domestic work, such as cooking and cleaning. These everyday tasks can be dangerous. For example, women who use traditional methods for cooking indoors face the risk of fire outbreaks and poor health from exposure to hazardous smoke.

Prossy Nanyonga, a Ugandan mother of four and grandmother of two lives in a rural village in Mukono district. She used to cook using traditional firewood stoves.

The amount of smoke was too much. It left me smelling like a smoky fire and gave me headaches.

Then she heard about BrightLife’s cleaner and safer BioLite HomeStove and she quickly signed up. With the new stove, Prossy discovered that she could cook faster and save the time and money she used to spend buying firewood two miles away. She could also charge her phone with the stove, a feature she hails as “a great benefit since the power often goes out for three days at a time.”

Stridah Phiri knew that she worked hard—she and her husband owned eight cows and an ox cart, leaving them comparatively better-off in their village in eastern Zambia. But they wanted to do better and were being held back by inadequate agricultural support structures.

We don’t have many extension services available to us, and the ones we do have are poor.

That was until Good Nature Agro, a FINCA Ventures partner, entered the scene. Good Nature Agro works to move smallholder farmers, like Stridah, into the middle class. They offered Stridah a solution: growing premium-priced legume crops with extension services and a promise to buy back all crops at harvest time.

Stridah and her husband decided to give it a try, and soon found that they were among the most successful farmers in their community, quadrupling their family’s income. They were able to reinvest their profits to acquire another cow to plow their fields, as well as fertilizer and even a solar TV.

Women are often the ones caring for others in their families and communities and therefore have the ability to make the most impact on other people’s lives.

Peris Wanjiku, a 32-year-old Kenyan woman from a slum outside of Karagita, runs a daycare for 20 children. Without any toilets at her property, her students used to have to cross the crowded streets to use a pit latrine. Because Peris couldn’t personally escort every child to the pit latrine, the children risked being hit by traffic while crossing the street, or even falling into the latrine. Peris was preoccupied with the safety of her students and decided to look for solutions.

She came across a social enterprise called Sanivation that provides access to safe and convenient toilets and she immediately enrolled as a client. Sanivation, a FINCA partner, installed its Blue Box toilet at the daycare, which it services twice a week for a small fee. Peris even erected a privacy screen around the Blue Box for the kids.

Peris no longer has to worry about her children’s safety. The children too are more comfortable using the restroom in the corner of the classroom.

My children no longer view the toilet as something to fear. They used to be afraid to even come to the nursery because of the toilet situation.

Women’s opportunities are often curtailed by a lack of access to credit and other financial services, but they won’t let that stop them.

Like Prossy Nanyonga, Sarah Nyambura was fed up with spending hours cooking on a dirty stove in her home in Rongai, Kenya. And, just like Prossy, Sarah invested in a BioLite HomeStove and experienced the same benefits of switching to a more efficient and cleaner stove. Then an idea popped up in her head: With the time and money she was saving, why not open a restaurant?

Today, Sarah runs her own restaurant and employs another worker. Once she realized that her stove had a built-in light, she was able to even operate the restaurant when the power was out in her town, a frequent occurrence that gave her an edge over her competitors. And she uses the stove’s heat-powered generator to charge her mobile phone so that she can receive orders from faraway customers. Sarah is delighted she acquired the BioLite HomeStove:

This cookstove cooks much faster than a regular stove so I can serve more customers. It’s also more economical because it uses less firewood.