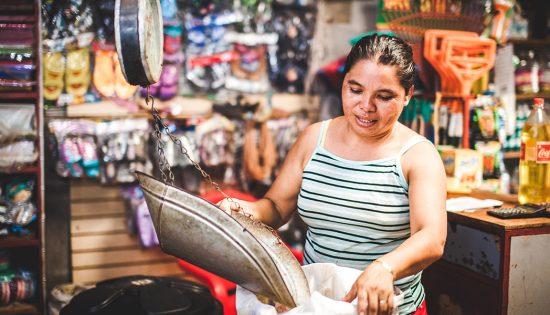 The driver told me that the dirt roads through the narrow ravine in which we were traveling flooded every time there was a heavy rain. And that exceptionally heavy downpours knocked down the utility poles that paralleled our path. And he was pretty sure that the torrents unleashed by Hurricane Mitch had left the hillsides around us completely denuded.

With that information setting the scene, I was quite pleased to be visiting Pochocuape, Nicaragua on a sunny day in the dry season.

I was there to meet Estela Amparo Sanchez Guerro.

The Story of Estela and Her Family

Estela is a long-term FINCA client who, along with her husband, Eddy, owns a tiny “general store.” Just a few steps off the road, her store is the only convenient option for most people in the area to purchase basic staples (rice, beans, etc.), fresh vegetables (some of which Estela grows herself) and even a small selection of clothing. And is the only place to purchase those goods when the road washes out!

Estela was born and raised in Pochocuape. Her parents and a few of her siblings live nearby. She met her husband at an event at a nearby church. And despite the dilapidated infrastructure, she’s happy to be raising her own children in this close-knit community.

Josefina, Estela’s 14-year old daughter, was at school when I visited, so I didn’t have the privilege of meeting her. But I did enjoy playing and talking with Estela’s 4-year old son, Azael. We raced toy cars around the dusty yard, and then he took me to see the enclosure where the family keeps a few pigs as well as around the back of the store to point out the small solar system that they’ve installed on the roof to power the lights on days when the power is out. A smart cookie, Azael told me that getting power from the sun was way better than getting it from ENEL (the local electric utility).

A Dream for the Future

Laughing as she told the story, Estela said that as a teenager she had envisioned herself becoming a fashion designer. Her parents had enough money to allow her to finish high school, but further education or an apprenticeship were out of the question. So, Estela became a shop girl and then further deferred her dreams when she got married and became a mother.

She doesn’t seem to regret the path her life has taken. But when she talked about her daughter, Estela’s voice tightened up and tears came to her eyes. She told me she hesitates to place any obligations on Josefina … she knows that her daughter must dream her own dreams and follow her own path. But Estela knows that a brighter future is possible. She doesn’t want her children to be obligated to running a tiny shop like her parents.

She and Eddy are saving their pennies. Josefina will finish high school in a few years and will – assuming she wants to – be able to go to college (as will little Azael one day). Given her aptitude in math, Estela envisions Josefina becoming a professional. Perhaps an accountant or a credit officer for FINCA. Maybe even a doctor or a lawyer.

She realizes that such a life might take her daughter away from the dirt roads of Pochocuape. But outside of the rainy season, Estela knows that Josefina will always be able find to her way home.

Estela’s hopes and dreams for her children are similar to the hopes and dreams we find with millions of FINCA clients around the world. They want better lives, for themselves and their children. And they know that the help of small loans and growing businesses moves them one step closer to achieving their dreams.

I plan to be back in Nicaragua next year. And I’ve made a note to myself to visit Pochocuape in the afternoon or on a weekend. I want to check in on Estela, Eddy and Azael. But mostly I’m curious to find out what Josefina envisions for her future. When I find out, I’ll let you know.