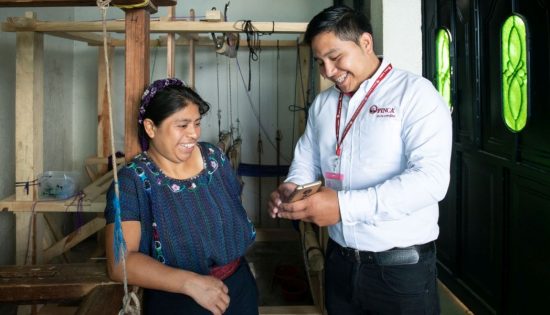 As September rolls around, bringing a change in the air and in the colors of leaves marking the start of fall, we also celebrate the beginning of Hispanic Heritage Month. Originally established in 1968 as a week-long celebration, today Hispanic Heritage Month runs from September 15 to October 15 in honor of people whose ancestors came from Spain, Mexico, the Caribbean and Central and South America.

As a Latina woman myself, this month is very special for me. Growing up as the daughter of Mexican immigrants, I was raised to be proud of my heritage and from a young age, I always cherished the times I was able to visit my homeland. However, as I got older, I became aware of the challenges my family in Mexico faced in access to basic services that most people in the US take for granted.

I am currently an intern at FINCA International. Like many Mexicans, the majority of FINCA’s LatinX clients have less than a secondary education and about a quarter of clients’ homes lack access to electricity.  And in these pandemic times, vaccine inequity and scarcity is a significant concern for many clients. As of mid-September, only about a third of people in Latin America were fully vaccinated against COVID-19 with a further 9 percent partially vaccinated.

However, during my internship, I am learning much about the ways FINCA is supporting and empowering Hispanic people and communities.

From its founding, FINCA has been committed to giving disadvantaged and underserved populations in Latin America the opportunity to access the resources they need to build livelihoods and fight poverty. In the 1980s, FINCA International’s founder, John Hatch, created the foundations for what we know today as microfinance in Bolivia. He noticed how poor Bolivian farmers were unable to rise out of poverty due to their lack of capital and came up with the idea of Village Banking ™. Today, Village Banking–groups of low-income entrepreneurs who share a loan–exists in many FINCA subsidiaries all over the world.

Across Latin America, FINCA is innovating to better serve clients. For example, FINCA Guatemala has tapped into the power of social media and the prevalence of smartphones to host their Village Banking group meetings virtually via WhatsApp since 2018, a switch that has been particularly useful throughout the pandemic. Village Bank meetings conducted on WhatsApp have now been rolled out across several different branches in Guatemala City, allowing clients to connect with their groups and the bank without having to leave the safety of their homes.

FINCA has rolled out a digitization strategy across its network in Latin America and around the world, demonstrating its commitment to adopt twenty-first-century solutions to meet the evolving needs of clients.

Lastly, FINCA’s dedication to empowering women is a cause that is very near and dear to my heart and FINCA’s subsidiaries in Latin America excel in doing so. Latina clients not only represent the vast majority of FINCA’s borrowers in the region, but many of these women are also the primary earners in their households. Nicolosa Sacay, a longtime FINCA Guatemala client, is a small business owner who credits FINCA with giving her the loan that allowed her to purchase her first loom. Today, she owns and operates a small weaving studio in the highlands of Guatemala and plans to invest the gains from her business into her daughter’s education.

Inspiring the Next Generation of LatinXs

My internship at FINCA has given me valuable lessons on how programs like microfinance, financial inclusion, and women’s empowerment work to help impoverished people raise their standard of life. I will apply these lessons to both my academic and professional career and work to inspire the next generation of LatinXs, immigrants and women to know that they can achieve a lot in life with the right support.