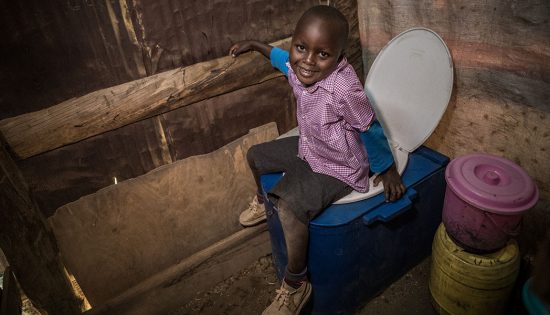 Going to the bathroom is scary. Just ask Peris Wanjiku, a 32-year-old woman who runs a nursery school in Karagita, Kenya. Without any toilets at her property, the children would have to cross the crowded streets to defecate in a pit latrine. Sometimes the young children would fall in. Of course, health, hygiene and safety of the students using these latrines would worry Peris constantly.

Peris isn’t alone in her fears. Over 4.5 billion people in the world live without access to a safe toilet. Some use public pit latrines, like Peris and her students. Others defecate wherever they can, out in the open, close to their living spaces. Even when some have access to a toilet, the waste isn’t properly treated. In fact, 80 percent of untreated wastewater flows back into the ecosystem.

Thankfully, Peris was able to obtain a Blue Box toilet. Sanivation, FINCA’s partner, services the Blue Box twice a week for a small fee. Peris erected a privacy screen in the back corner of the classroom where she placed the Blue Box. This instantly made the children feel more comfortable.

My children no longer view the toilet as something to fear.

But for the billions of others who aren’t as lucky as Peris, they still need a toilet. Here are 5 reasons why everyone needs access to an adequate toilet.

In fact, every day, over 750 children under the age of five die from a diarrheal disease related to poor sanitation and unsafe water. The World Health Organization estimates that with proper sanitation, including the use of a toilet, over 840,000 deaths from diarrheal diseases could be averted.

It is estimated that over 160 million children suffer chronic malnutrition and stunting because of open defecation and contaminated water sources.

Globally, 1 in 3 schools does not have any toilets, just like Peris’ nursery once did. As young girls hit puberty and begin menstruating, many drop out of school if there is no access to adequate toilets.

Many women don’t feel safe finding an open area or using public toilets for fear of an attack from men. And it is time consuming finding a safe place to defecate. Women and girls spend an estimated 97 billion hours each year trying to find a place to go.

The billions of lucky ones, like us, have the convenience of using toilets at home, at work, at school, at restaurants, on planes and trains, at stores and every other modern establishment. But for the other billions who don’t have this luxury, few feel comfortable. Toilets, like the Blue Box from FINCA’s partner Sanivation, bring a sense of privacy and dignity for a simple but natural daily occurrence.