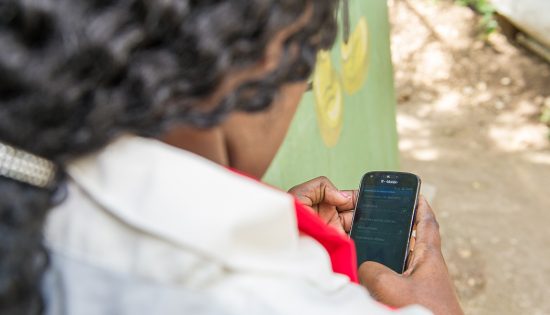 Beatrice lives and works in Carrefour, an impoverished and populous residential community near Port-au-Prince which is still recovering from the impact of the 2010 earthquake.  She supports her family by selling books and stationery items outside of a community school she and her husband started ten years ago.

In 2016, Beatrice’s loan officer met with her Village Bank group to let them know some good news – there was no need to make the long trek to a FINCA branch for their monthly repayments.  FINCA could now receive repayments from a mobile phone.  After hearing more details, the group signed up for MonCash mobile banking and have enthusiastically embraced the innovation.

“I like MonCash,” Beatrice says. “It saves me time and money to travel to the branch. It is also safer as I don’t have to carry all my Village Bank members’ cash to the branch.” For Beatrice and her group, repayments via MonCash replace the long journey to a FINCA branch with a short walk to a local banking agent. FINCA’s own journey to provide this convenient new channel has been a long road with some key lessons learned along the way.

In 2013, FINCA partnered with Digicel—the largest telecom provider in Haiti—to allow clients to use their mobile phone to easily and securely repay their loans. With this service, clients would no longer need to make the long, expensive and sometimes risky journey to a FINCA branch for loan payments each month.  With the MonCash mobile money service, clients could simply transfer cash to their e-wallet through a nearby MonCash agent, and send the loan repayment via their mobile phone.

The benefits seemed self-evident and FINCA anticipated that the service would be well received by clients. But by late 2015, fewer than 350 FINCA clients were paying their installments via MonCash.

A Renewed Look at Technology

FINCA’s team in Haiti wanted to understand why clients were not enthusiastically adopting this new channel. From August 2015 to April 2016, the Swiss Capacity Building Facility (SCBF) supported FINCA Haiti’s work to understand how clients were using the new delivery channel and what changes could help more clients access the technology.

Through a series of surveys and focus groups, FINCA learned more about clients’ needs, preferences, concerns and their experiences with MonCash. FINCA found that 93% of clients owned a mobile phone with a Digicel line and wanted to be able to repay their loan via their mobile phone, confirming that demand for financial technology was in fact very strong.  Thereafter, FINCA talked to MonCash agents and completed an internal assessment to identify roadblocks and areas for improvement. Starting in early 2016, FINCA Haiti made four changes to the MonCash initiative that have unlocked the potential of this new technology-based channel:

Digicel’s existing MonCash agent network was limited in size and clustered around urban areas, far from where many of FINCA’s clients live and work. To address this, FINCA identified, recruited and trained additional MonCash sub-agents to cover more areas within FINCA’s reach, including rural communities. FINCA also trained 20 existing MonCash agents so they could more successfully meet the needs of our low-income customers. In addition, FINCA Haiti offered lines of credit to agents, allowing agents to better manage their liquidity and more reliably serve customers.

FINCA’s credit officers are trusted advisors to our clients who provide financial education and make recommendations about FINCA products and services. So when it comes to adoption of MonCash by FINCA clients, they play a leading role. However, as of late 2015, credit officers in Haiti weren’t clear about how mobile payments worked overall, or whether it would positively impact their clients and their own work.

To address this, FINCA rolled out a refreshed MonCash training program which simply and concretely explained the MonCash repayment channel. It also guided credit officers through a discussion on the benefits of MonCash for clients and for credit officers in their work.  To make the theoretical practical, the training allowed participants to interact with the technology and perform mock MonCash transactions. Because it was delivered as a “training of trainers,” it equipped credit officers to take the lead on client training and championing of MonCash going forward.

To encourage credit officers to actively promote MonCash among their clients, FINCA introduced the “MonCash Challenge.”  In this non-monetary incentive scheme, Digicel smartphones were awarded to staff who had the highest enrollment and use of MonCash repayments among clients in their portfolio both on a monthly basis and over a four-month period.  This simple incentive and internal competition proved catalytic; use of MonCash doubled in the first month of the MonCash Challenge alone, and it doubled again by the end of the four-month incentive period.

Haiti has around 3 million mobile subscribers, and mobile money has been available in some form since 2010. Yet today, fewer than 60,000 Haitians are active users of mobile money.

With no prior mobile banking knowledge, all of FINCA Haiti’s clients needed in-depth training on MonCash. FINCA found that the original training approach – which was a lecture format largely focused on product features – led to low level of retention and interest among clients.

A year later, with FINCA credit officers well trained to be champions of the new platform, they themselves provided the needed practical and demonstration-based training for their clients.  Because of their close relationships with clients, credit officers were able to discuss the benefits of this new technology with authenticity and in personal terms. They gave clients greater confidence by also talking about the security features of MonCash and what to do in case clients encounter problems or have questions. With these new approaches, clients gained the knowledge and confidence to use their mobile money account on their own.

Some of the Digicel communications were addressed to FINCA’s Operations Department, others to Banking Operations, and some went through the CEO. Both sides found it challenging to resolve service issues or problems.  Most importantly, the lagging in uptake had created frustrations on both sides. The partners more clearly defined communication channels and began holding bi-lateral meetings every two months to coordinate activities, discuss progress, address bottlenecks and create common understanding. As FINCA made progress in client enrollment on MonCash, Digicel’s leadership was able to dedicate more time to the partnership and expand their resource contribution.

The result? Today, over 7,000 FINCA Haiti clients use MonCash for their monthly loan repayments, up from 350 just a year prior.

Repayments are just the start of how mobile phone technology can transform the landscape for financial inclusion.  In early February 2017, FINCA disbursed loans directly to clients on their MonCash e-wallet account. Not only is this a first for FINCA Haiti, but it’s the first time that any FINCA subsidiary has disbursed directly to an e-wallet.  Without any need to move money between their FINCA accounts and e-wallet, clients can make electronic transactions via MonCash or receive the cash they need for their business activities through their local MonCash agent.

In the year ahead, FINCA will continue to roll out MonCash agents in Haiti and will enroll more clients to use receive disbursements and make repayments through the mobile system.  For clients like Beatrice, this frees up even more time and resources to what matters most – her business, her family, and her community.